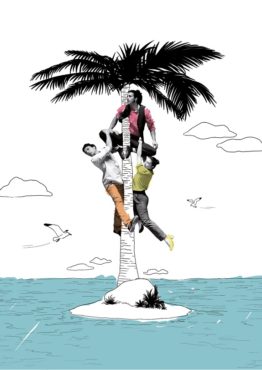 
ISLA is based on the dreams and hallucinations of three shipwrecked characters who find themselves alone and need each other to remake their story. These characters create unbelievable situations and choose the most bizarre strategies to overcome the limits of their island.

Based on a work of movement and body, the most typical tools of the circus, such as acrobatics and the Chinese pole form part of the show as a scenic language. This project reminds us of the subtle barrier that exists between physical theatre and dance; circus and risk, and magic and dreams.

Isla has been performed at festivals all over Spain and elsewhere in the world and it has received awards such as the 1st Award of the Noctivagos Theatre Certamen 2017, and the Award to best Aragonese circus performance of the Festival de Circo Ciudad de Zaragoza in 2017.